The start of the 18th century again saw a wave of morality and intolerance, protesting against sin and sexuality. Society became more prudish, and stringent action was taken against whoredom. This didn’t last long however since the second half of the century welcomed a new professional approach towards prostitution. Large, wonderfully furnished brothels opened up, to be recognized by the red colored lanterns hanging by the doors.

The occupation of the Netherlands by the French, from 1795 onwards, meant a new phase for the Red Light District altogether. Although predominantly aimed at fighting sexually transmitted diseases, Napoleon introduced some kind of legalized prostitution. Prostitutes had to report to the police twice a week for a medical check-up. The healthy ones received a red card and could continue doing their job. In the case of any disease, they were given a white card, stating the name of the illness, and provided with free treatment. In the meantime though, while getting clean again, working was prohibited.

This policy continued even after the French left in 1813. By that time the number of prostitutes in Amsterdam had increased dramatically. In a letter to the Dutch King Willem I, dating 1816, there was talk of more than 3,000 women walking the streets of De Wallen.

It was to be expected. After a period of relative tolerance parochial Christian movements again got a tighter grip on Dutch society. At the end of the 19th century, religious representatives went out at night in an attempt to change both clients’ and whores’ attitudes, waving Bible texts in front of them and singing pious songs. The new moral, fiercely opposing prostitution, led to bans on brothels issued by the city council in 1897 and 1902. Prostitution was not, unlike in other cities, forbidden, however, and therefore business soon flourished again like before. Whores from other cities began rolling into Amsterdam, ‘the city of sin’, to try their luck.

One thing did change, however. The police did not allow women to entice their clients standing in their doorways. They could only do that from behind the window curtains. Therefore an increasing number of prostitutes now stood ticking on the glass, seducing men walking by to come in. While the scarcity of windows made owners of the premises raise the rent with exorbitant amounts, it turned out to be the beginning of window prostitution as it now stands in present-day Amsterdam. 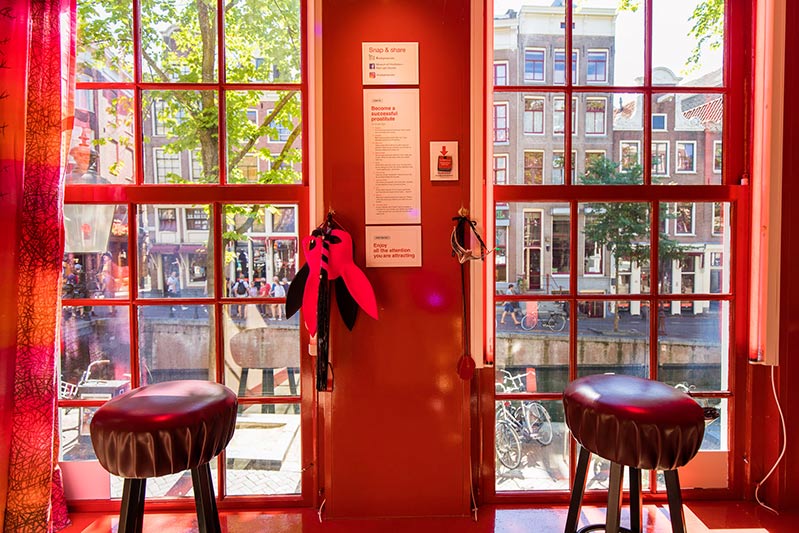 Time and time again the government introduced new measures to curb prostitution. Seemingly without success, since it was increasingly prevalent on the streets. When five women were brutally murdered in the mid-fifties of the 20th century, public opinion shifted again. The media called for legalization but instead, the police became more stringent.

Still, the past decades have seen various attempts by different governments to make prostitution into a legal profession. An awareness grew that the position of whores needed serious attention, considering they sometimes work against their will – being forced by so-called ‘loverboys’ or pimps who brought them from abroad under false pretenses.

In the year 2000 brothels in the Netherlands finally became legal, though requiring a permit to do business. Prostitution is nowadays regarded as an official profession, meaning that prostitutes must, like people in any other job, pay income tax and follow rules and regulations applicable to other professions.

The Red Light District is a must see. And your visit is not complete without a trip to Red Light Secrets! Tickets from €10.